It has been five years since the Oneida-Herkimer Solid Waste Authority (Authority) successfully converted its Recycling Center from dual stream to single stream recycling.

It has been five years since the Oneida-Herkimer Solid Waste Authority (Authority) successfully converted its Recycling Center from dual stream to single stream recycling. The Recycling Center produces high quality recyclable material that is sent to markets and mills around the world to be made into new things.

The Authority’s original curbside recycling program began in 1991. Since that time, the Authority has processed approximately 900,000 tons of recyclables from households, businesses, industries, schools and institutions in the two-County region. In 2012, the Authority began operating its single stream Recycling Center and launched the RecycleOne – One and Done program.

The Authority’s RecycleOne – One and Done program allows residents and businesses to combine all recyclables for collection. All recyclable items – paper, plastic, metal and glass – can be mixed loosely in one designated recycling container of choice, under 35 gallons. The program prohibits recyclables to be placed in plastic bags or bundled with string for collection. There is one exception – shredded paper must be bagged. No trash or green waste can be mixed with recyclables. 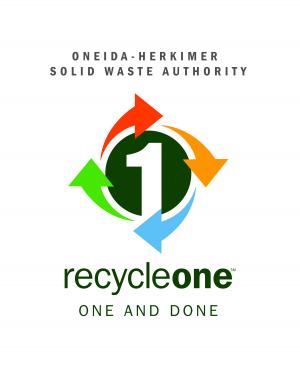 Local municipalities have seen a savings in waste collection costs since the Authority’s conversion to single stream recycling. The system allows for more efficient collection of recyclables as haulers can use co-collecting trucks to pick up recyclables, which can then be compacted.

Since investing in the single stream processing facility, the Authority has utilized its excess capacity to process out-of-County recyclables. In addition to Oneida and Herkimer Counties’ recyclables, the Authority also processes material from Oswego, Lewis and Fulton Counties. The additional revenue from processing this material helps to further offset operational expenses.

The single stream processing system utilizes state-of-the-art technologies to sort recyclables.  The mechanical sorting equipment that it uses allows for more efficient processing of materials, including the ability to market recyclables at a higher grade. This, in turn, increases revenue from recyclables which is used to fund the Recycling Center and other Authority programs.

“By making recycling simpler and more convenient with this technology, the Authority has significantly increased participation, further reduced waste being sent to the landfill, recovered more material for market, and stabilized and reduced collection costs for the region,” stated Authority Recycling Educator Jamie Tuttle.

Although the Authority encourages tours of its Recycling Center, many individuals have not yet seen the single stream recycling facility. The Authority created a video that provides close-up views of the advanced sorting technologies used.  It follows recyclables from curbside to the Recycling Center where material is processed and sorted. It then shows how the recyclables are baled and shipped to markets to be made into new materials. The video also explains other Authority facilities that serve the entire two-County area.

If you are interested in setting up a tour of Authority facilities, or for more information regarding Authority programs and services, please Contact Us.

Previous All News Next